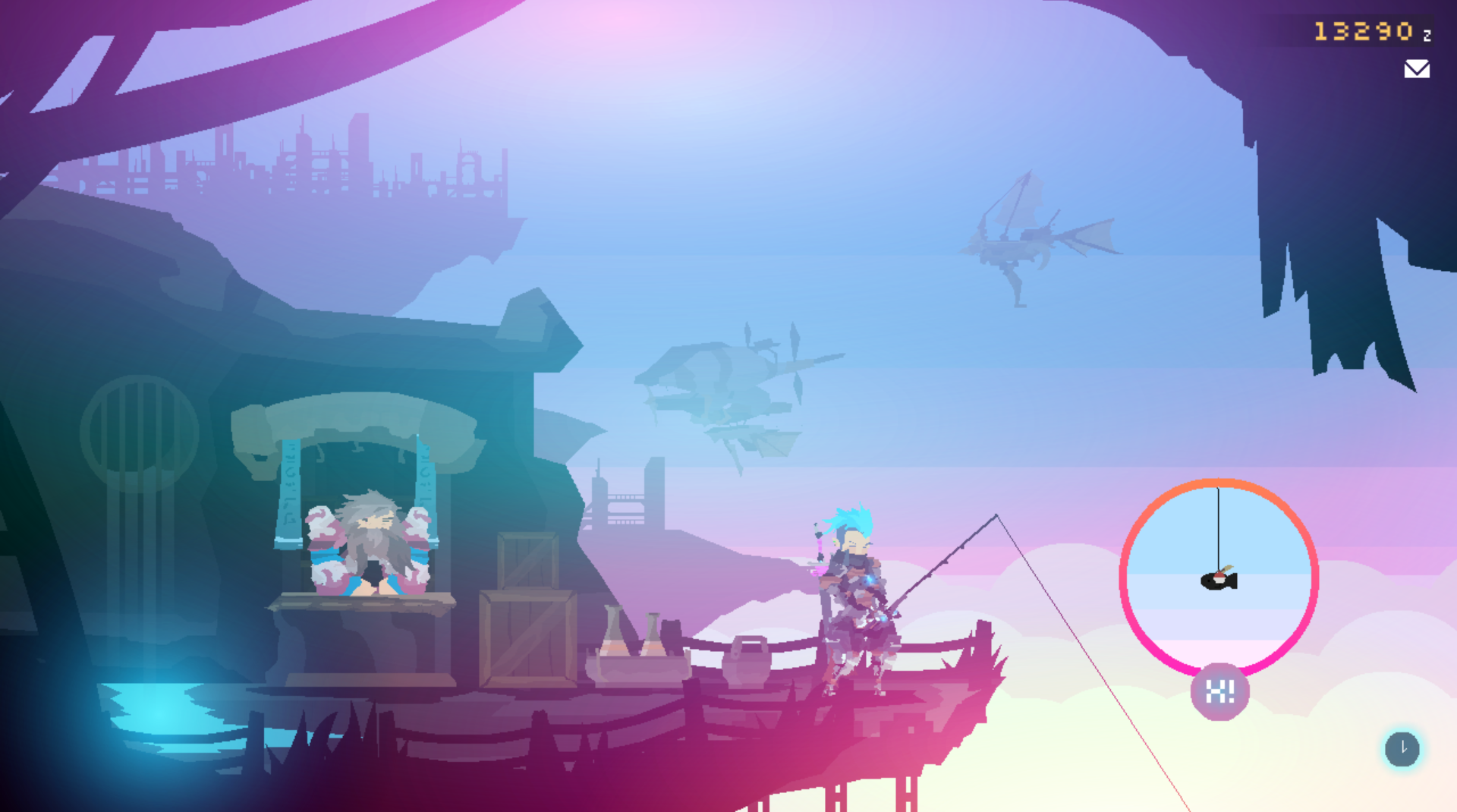 The latest version of Flux seeks to expand upon what was working with the original game's release, introduce major improvements that could elevate the entire experience, and offer a revamped UI for some of the game's menus. 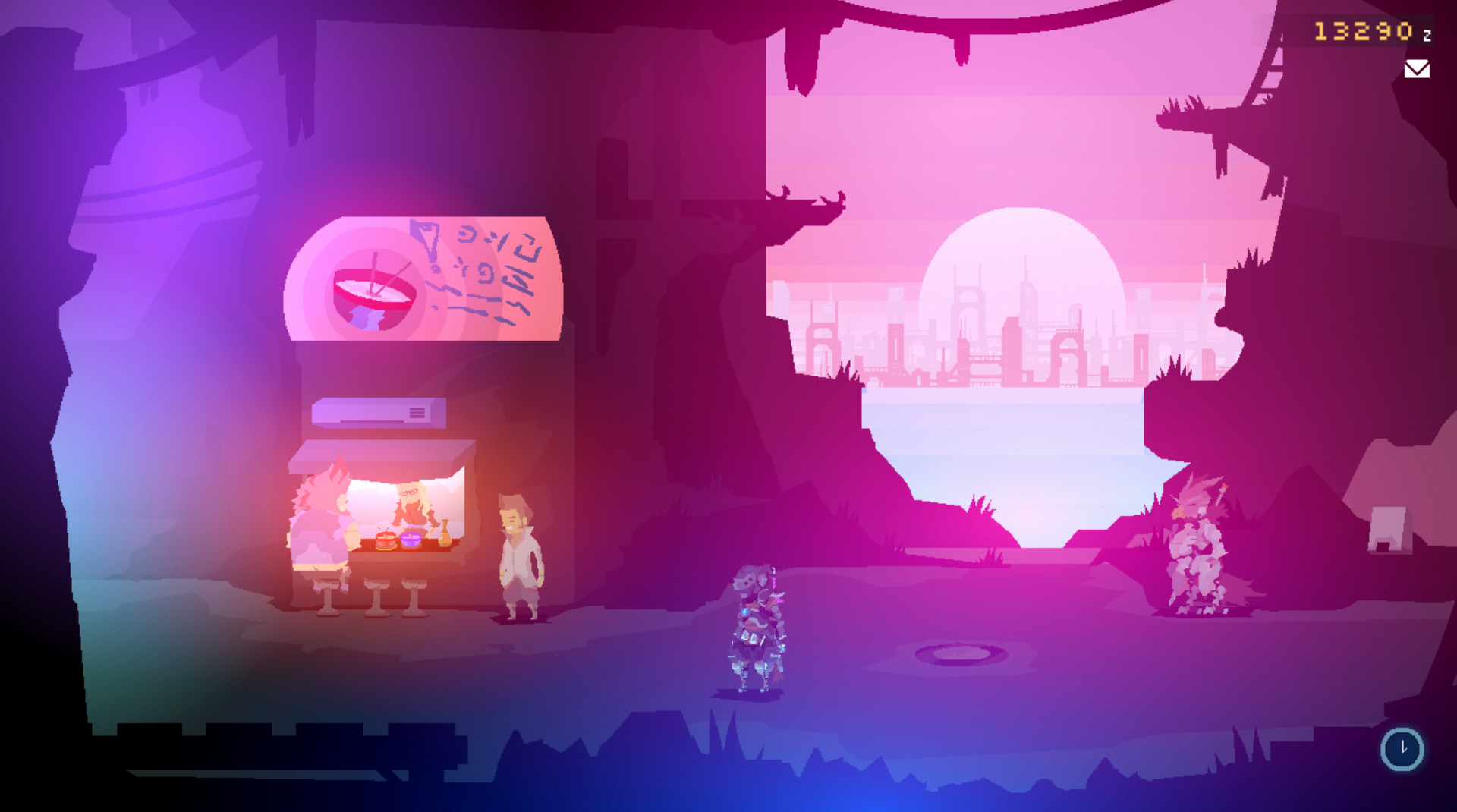 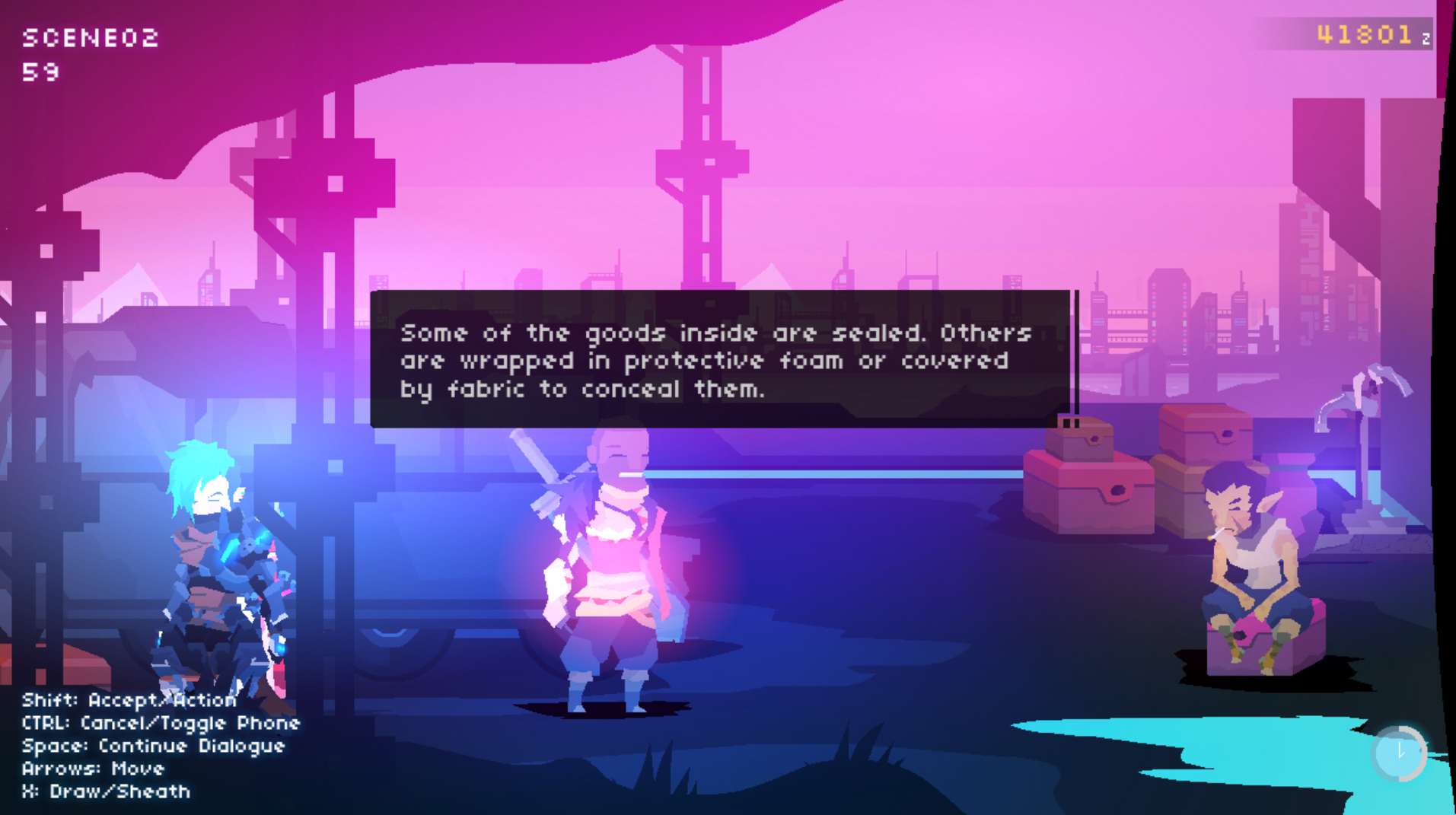 The biggest change is clear: the world of Flux is much bigger! Players now have a broader city area to explore that is full of more characters to interact with and a bunch of interactive "examines", a brand new component of the update that provides an additional layer of that fiction that drives the game's context. Fast travel options are now available from the new level select menu (your bike!) and hidden items and oddities can be found throughout these new areas.

Oh, and there is a fishing minigame too.

Previously, time would skip ahead a day if you took a job and returned back home. This caused some folks to repeat this process quickly in order to progress through the story. Now, a timer is used to indicate when it is ready for you to return to your home to rest in your bed to sleep and advance time. Taking jobs have a chance of adding a chunk of time to the timer based on the "follow up stories" that now trigger before returning home from a minigame. 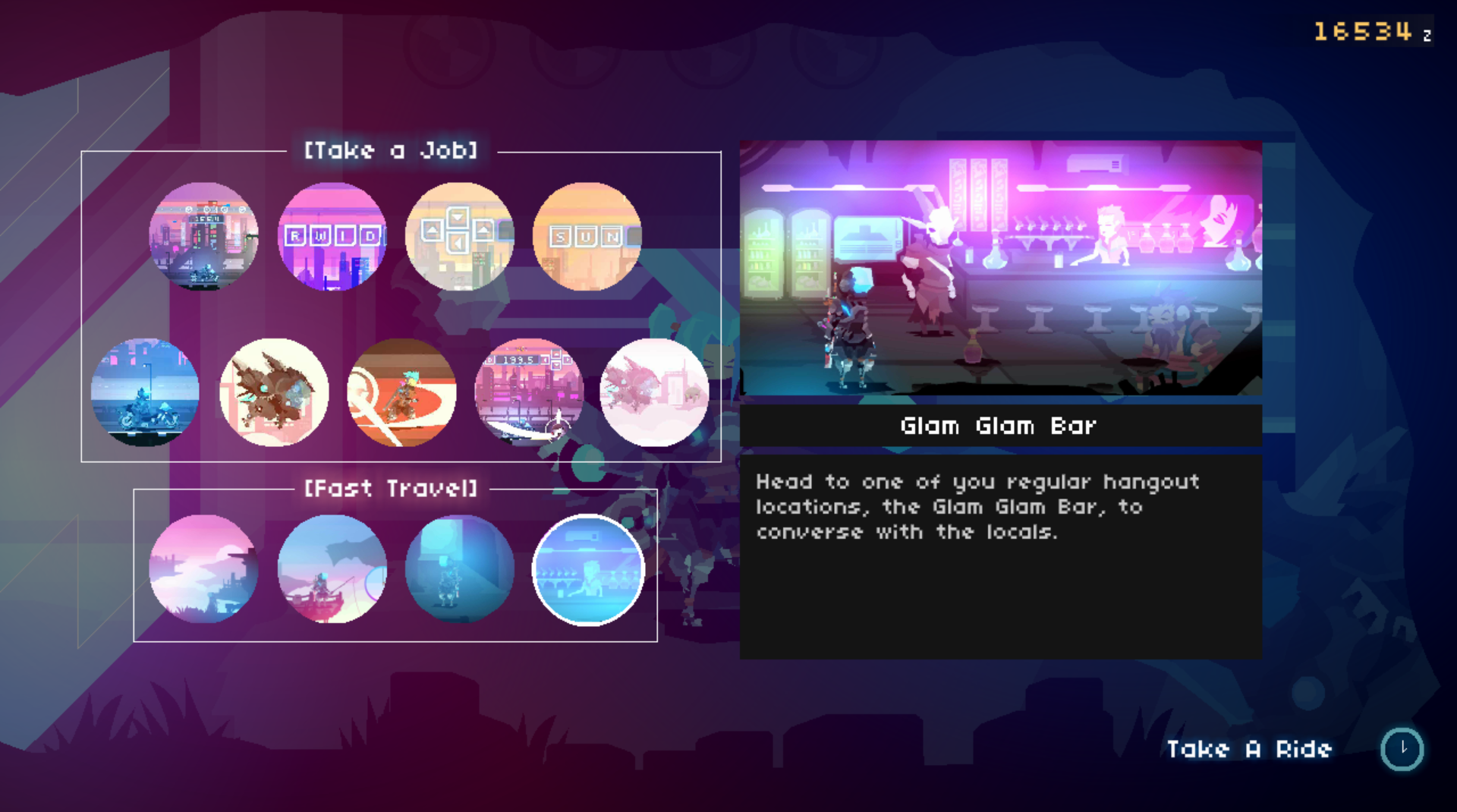 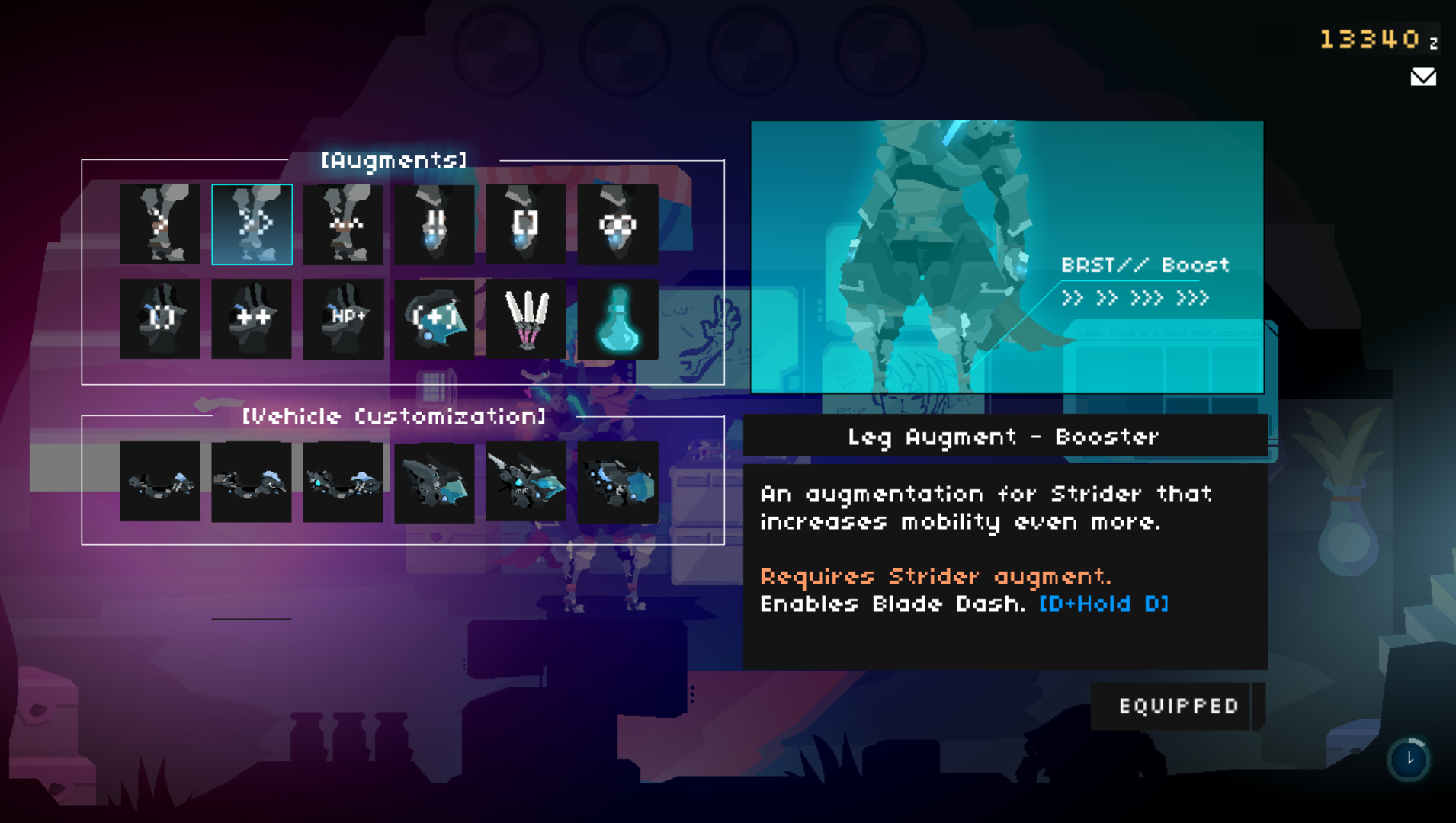 In addition to new menus, tweaked UI elements and a host of fixes and updates to different modes throughout Flux, a brand new mode is available called "Groove". More akin to a traditional rhythm game, it tasks players with pressing the provided input at the right time. Completing a sequence of proper commands will provide a bonus of credits! The Assault and Armament modes have also been updated to include health points (instead of relying on the Flux resource), blocking and more responsive and impactful interactions with enemies. Numerous items and upgrades have been added and modified based on these changes.

Major Features + Changes:
- The world of Flux has expanded! New areas are available to explore.
- Over 50+ new "descriptive" interactive elements are spread throughout the world
- Progressing to a new day now requires time to elapse and the player to return to their bed
- New Mode: Groove, representing a traditional rhythm game mechanic
- New Fishing minigame! Head out to Fisherman's Roost to cast a line and earn some extra money
- Assault and Armament Modes have been overhauled to include new upgrades, blocking and more
- New UI frame throughout every mode to improve legibility and clarity
- New UI for Augments and the Minigame Selection Menu- Now with Fast Travel options!

General Changes + Notes:
- Adjusted the prices for every cosmetic and upgrade in the game
- In Assault Mode, D now acts as a Guard that will knock enemies away, with dashing still available by using D and a
- When starting a new game, you must go through the first conversation with Mulberry before leaving your room
- Increased knockback for Guards when they block with a shield
- Reduced knockback for Guards when their guard is broken
- Added an after-image FX to Blade Dashing
- Added a "moving forward" animation for the Mech
- Added Hit Points (HP) to Assault mode that trigger returning home when hitting 0 (Momentum bottoms out at 50 in Assault once initiated)
- Potions now restore HP and have FX
- Added Hit Points (HP) to Armament mode that trigger returning home when hitting 0
- Added a UI indicator when you own the Shield Harness
- Reduced the recharge rate of the Shield Harness
- Reduced Max Flux in Assault Mode
- Updated the Sword Charge animation
- Fixed an issue that would cause odd skipping between Chroma filters when loading into an area
- Extended the delay between switching Chroma filters manually
- Fixed an issue that prevented music volume from properly matching your Flux
- Fixed an issue where the interact indicator wouldn't display at times
- Fixed an issue where you could return home while NPC dialogue was open and allow it to persist elsewhere
- Fixed an issue where you could swap swords without actually having earned Tempest
- Fixed a depth issue with a light in the Bar

Hi there! Beautiful game, do you have any interest in publishing to steam? I work for a publisher and we'd love to talk about how we can help with marketing and publishing. Feel free to reach out if you'd like to talk: info@sedoc.net

Hi! Thanks so much! I've already published the game to steam independently, actually: https://store.steampowered.com/app/1070990/Flux/